This week’s lesson is dedicated by Rabbi Yossi & Chani Serebryanski in loving memory of his father Rabbi Aharon Serebryanski, the Rebbe’s representative to Australia and New Zealand. Yartzeit 9 Nissan.

On Passover eve, we all gather around the Seder table and turn our attention to the children’s recital of the Four Questions. These Questions are not just children’s play. They have deep meaning and relevance for every person’s life. The following pages contain a new and original interpretation for the ancient and beloved text.

What makes this night different from all the other nights?

The Rebbe Rashab famously interpreted the Mah Nishtanah as follows: “What makes this night—this final exile—different from all the other nights—the other exiles which preceded it?”

Now, we have experienced several exiles. In addition to our exile in Egypt, we were exiled among the Babylonians, the Persian Medes in the time of Purim and the [Syrian] Greeks in the time of Chanukah. Today, we are in our final exile. There is no doubt that this final exile is different. But, in this regard, the child asks, “What makes this night different?”

Question One: On all nights we do not dip even once, but on this night, we dip twice?

The first unique element of our final exile is that “on this night, we dip twice.”

The Rebbe Rashab explains that “dipping” is “an expression of cleansing and purification.” On all other nights, we only dipped once, i.e., “we weren’t fully cleansed during the previous exiles, for they were followed by further exiles. On this night, however, we will be ‘dipped’ twice—our bodies will be refined and our souls will be revealed.”

To explain this in simple terms so that even a child—the questioner—could understand:

We dip things into water or other liquids to cleanse them from unclean matter. Even a young student knows that Torah speaks of “bathing in water and becoming pure”—in other words, dipping is a form of cleansing.

This is also true on a spiritual level: when we do something that is forbidden—and even a child knows that he might occasionally do something wrong, after being enticed by a friend etcetera—we need to cleanse and purify ourselves from that deed.

We therefore need to be dipped twice, “to cleanse ourselves from sins of the body and the soul.”

This is the meaning of the first question, “On all nights we did not dip even once, but on this night, we dip twice?” Other exiles were followed by incomplete redemptions, which means that the Jewish people weren’t fully cleansed and purified, and therefore, they once again reverted to exile a short time later. But this final exile will be followed by a final and complete redemption, and all evil and pain will be abolished from existence. This indicates that our exile has the qualities of a “double dipping” which represents complete purification for both our bodies and our souls. In the Rebbe Rashab’s words, “our bodies refined and our souls revealed.”

Question 2: On all nights we eat chametz or matzah, but on this night, we eat only matzah?

This is followed by the second question: “On all nights we eat chametz or matzah, but on this night, we eat only matzah?”

Chametz and matzah differ in the fact that chametz rises, which signifies a perception of self-worth and arrogance—which is the source of all evils. A child knows that as a result of his sense of self, he may disrespect his teacher or parent, and he may even come to disrespect G-d. Matzah, on the other hand, represents humility and unpretentiousness.

“On all other nights, we ate chametz or matzah.” The other exiles didn’t conclude with a complete redemption, which indicates that we were left with a residue of chametz. But at the end of this “night,” with the arrival of the true and final redemption which won’t be followed by another exile, we will be “only matzah,” cleansed of all chametz, for evil will cease to exist.

Question 3: On all nights we eat any kind of vegetables, and on this night, we eat only maror?

We then come to the third question: “On all nights we eat any kind of vegetables, and on this night, we eat only maror?”

Vegetables are not essential food items like bread. Rather, they enhance our eating experience. When we are able to supplement our staples with vegetables, our meal is a more pleasurable experience.

In this regard, we say, “on this night, we eat only maror.” In the future redemption, when G-d will be revealed, our pleasure will derive from our experience of G-d and not from our experience of. Thus, we will only eat to sustain our bodies, and the food will taste like maror. Setting aside time for eating will be an irritating chore; although it will be a necessity to remain alive, we will have preferred that G-d create us such that we do not need to eat at all. And, we will only eat what is necessary; pleasures and luxuries won’t be pursued at all, being bitter to the palate.

This is something even a young child could comprehend: he knows that when his mother calls him to dinner when he’s in midst of a game, he yells that he’d rather continue playing than eat, because he finds more interest in the game than in eating. He eats only because he is forced to, or because he is told that without eating, he won’t have energy to play. But that act of eating itself is insignificant. It is an experience of “maror.”

It will be a similar experience when he matures. We’ve often mentioned the writings of Maimonides in his commentary on the Mishna: A young student of Torah should be given sweets as reward, and as he grows he should be given rewards that are more significant. Over time, he will begin to learn Torah for the sake of reward in the world-to-come, and then he will learn to appreciate Torah study for its own sake. When he will begin to understand that Torah study is more valuable than food, he will be pained by the fact that he must take valuable time to eat; eating will become a chore that tastes like maror.

So, during all the other exiles, we “ate vegetables.” there were times that we dedicated ourselves to Torah study and relegated physical pleasures to the status of “maror,” but there were other times when we indulged in the world’s pleasures.

But on “this night,” with the redemption from this last exile, all physical pleasures will be like “maror.”

Question Four: On all nights we eat sitting upright or reclining, and on this night we all recline?

This is followed by the fourth question: On all nights we eat sitting upright or reclining, and on this night we all recline?

Both sitting and reclining are positions of rest. A child knows that after standing for a while, he gets tired and needs to sit down to rest. But there is a distinction between the two positions. Sitting isn’t true rest. It is a midway position from which you can easily stand if necessary. Reclining, on the other hand, is an expression of true, uninhibited freedom.

This defines the difference between this exile and the previous ones. Some of the redemptions were longer and some shorter, but they always knew that another exile could come in its wake, so even the longer redemptions weren’t a true expression of freedom. Only the final redemption, which will not be followed by another exile, will be a true “rest” from exile, and then, “we will all recline”—we will achieve true rest.

The Greatest Question of All

Just several months earlier, the questioner might ask, he was himself locked behind the Iron Curtain where there were five non-Jews against every Jew, holding him back from living a Jewish life and fulfilling the Torah and Mitzvot which are “our life and the length of our days.” He saw that every act necessitated self-sacrifice.

Even now, after leaving that land and coming to a state of peace and tranquility, he still cannot truly rest, knowing that his colleagues behind the Iron Curtain continue to struggle with observing Torah and Mitzvos.

If so, he asks, “What makes this night different from all the other nights?” He is being told that this will be a final redemption—but how is that so?

The answer is, “We were slaves to Pharaoh in Egypt and G-d took us out…” The people of Israel were servants to Pharaoh in Egypt, they were enveloped by Egypt like a baby in the mother’s womb; they needed to be removed as “a nation from within a nation…” Nonetheless, G-d did not leave them for a single moment, and as soon as He so desired, He took them out with a strong arm.

The same will occur for us with the future redemption; in the words of the verse, “As in the days of the Exodus from Egypt, I will show you wonders,” with the coming of Moshiach, very soon. 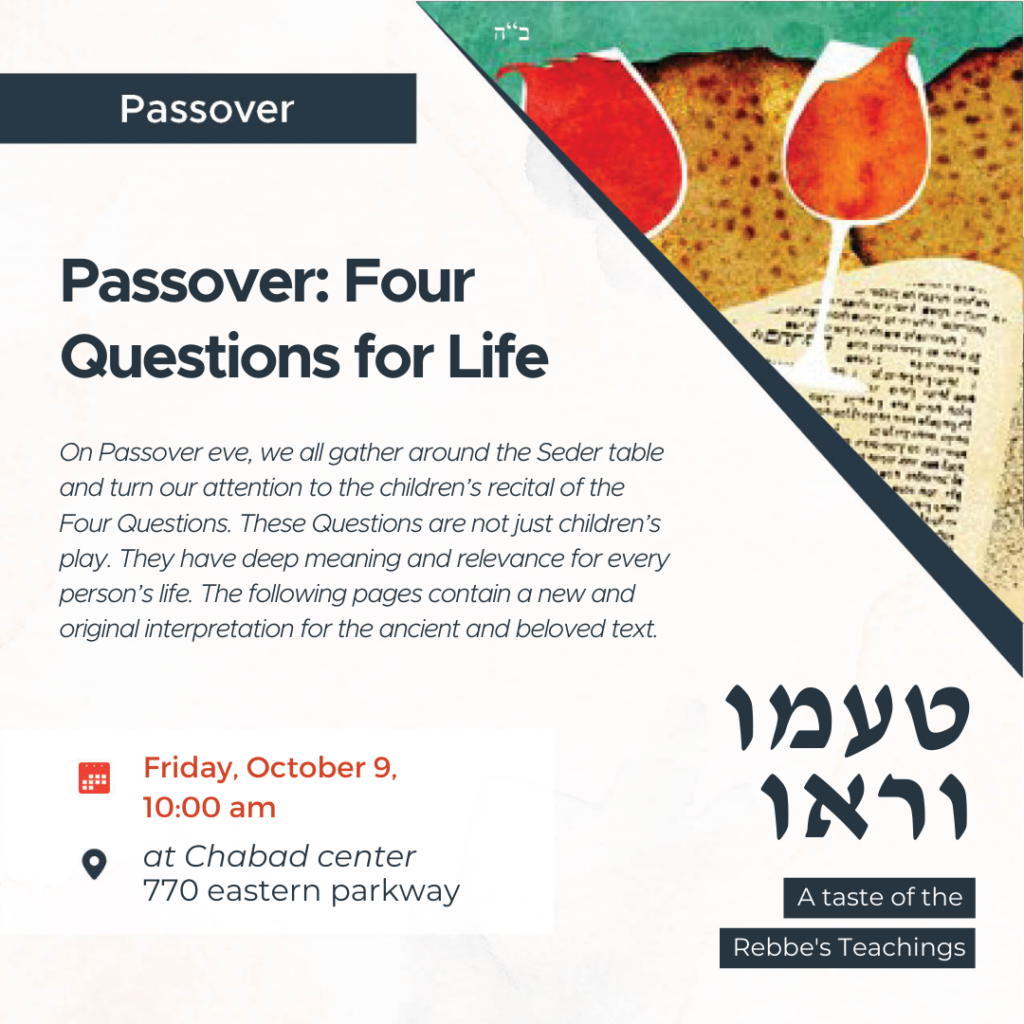 To post ideas, insights or stories that can add to the topic, please include them below.